The Long Walk for Leukodystrophy

We’re in awe of John Olsen’s marathon 2016 solo journey by foot across the continent in fundraising for Leukodystrophy Australia.

On Thursday 31st March 2016, John began his walk from the very tip of Cape York. He initially walked to his base camp where he completed his preparation and setup before commencing the bulk of his walk on Sunday 3rd April. On Saturday 24th December 2016, John walked the final few kms to Cape Leeuwin (the south west most tip of Australia) to formally complete his Long Walk for Leukodystrophy – over 5,000kms! John then walked another 300-400kms to the outskirts of Perth for good measure!

John has joked that this was not just the longest walk for Leukodystrophy but also the longest limp 🙂 A joke for John, but an important reminder about John’s effort and achievement!

Having arrived back at home in Geelong, the walk might have finished, but John has further plans…stay tuned!

Thanks again John for your super human effort for Leukodystrophy. 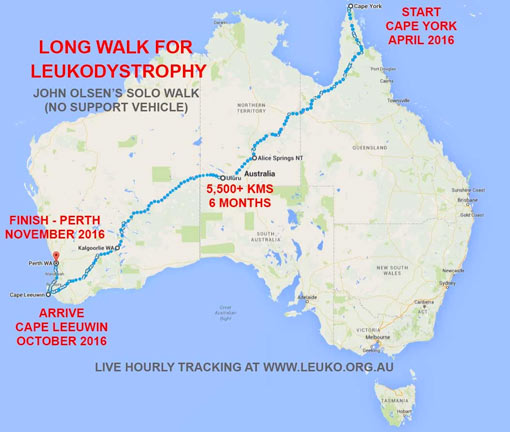